The “Good News” Of The Fake Catholic Gospel

The “Good News” Of The Fake Catholic Gospel

This is a brief overview of some of the most serious false teachings of the Catholic Church. It is not meant to offend Catholics. It is meant to get their attention and show them major areas of doctrine and practice where their Church is deceiving them and leading them astray from the TRUE teachings of Jesus Christ as found in the Bible, and in the New Testament in particular. If you are offended by this information, please be assured that its purpose is for the spiritual GOOD of Catholics, that they might ABANDON their Church (yes, that’s right, I said ABANDON it) and it’s many UNBIBLICAL practices and SEEK the truth about Christianity and about salvation, as described in the Bible. If a religion is leading you to Hell with their false plan of salvation, like the Catholic plan of salvation, then you need to stop trusting the eternal destiny of your soul to that religious organization, be it the Catholic Church, the Mormon Church, the Jehovah’s Witness Watchtower Society or whatever else is masquerading as the “true” Church started by the Lord Jesus Christ.

List Of Major Fakes (frauds and false teachings) In The Catholic Church: 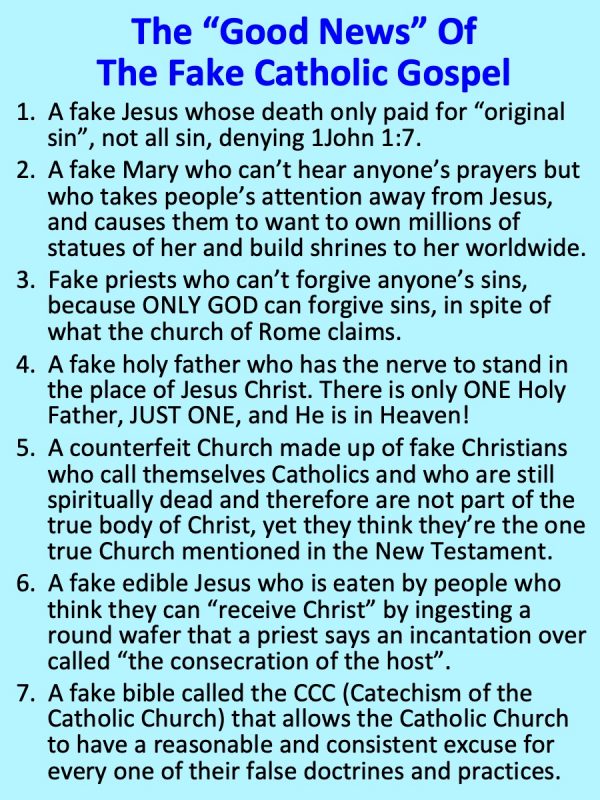 Posted in About Catholicism, Catholic Doctrine