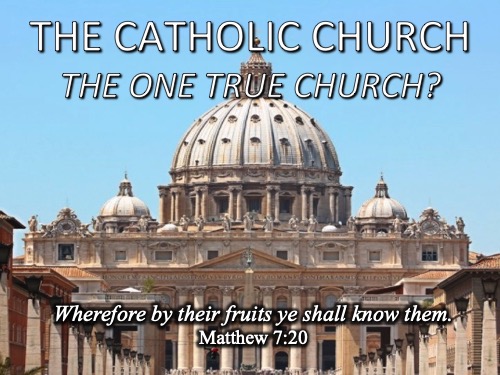 Catholics love to repeat the claim that the Roman Catholic Church whose headquarters are in Vatican City, Italy, is the one true Church started by the Lord Jesus Christ in the year 33AD. But is this claim true? Can it be disproven? In this short article we will show that Catholic claims to their Church being the one true Church can easily be disproven, by looking at the some of the fruit and characteristics of that religious and political organization.

Signs indicating that the Catholic Church is not the TRUE Church

Here are some points to examine to see if the Catholic Church is who they say they are, and even if they are a Christian Church of ANY kind resembling the early Christian Church described in the New Testament.

If the Catholic Church really was the “one true Church”, then why would they:

Based on the evidence presented above, an honest person would have to conclude that the Catholic Church, is neither the one true Church started by Jesus Christ in 33AD and really is not a true Christian Church at all, when comparing it to the New Testament Church described in the books of the Bible. Its doctrines and practices are loaded with customs found in the various pagan religions that were popular during the early years of the New Testament Church. Rather than admit this to be the case, Catholics will often use their most popular “defection technique” to try to justify their claim of exclusivity. That technique is to claim that the only other alternative to their Church would have to be one of the “40,000” (they claim) Protestant denominations that did not exist until the 1500s. However, the TRUE Church has always existed since the first century and in parallel to the Catholic Church as Catholicism morphed out of the blending of Christianity and paganism. Its just impossible for Catholics to believe this because:

1. They have been so heavily indoctrinated by their Church to think they’ve got it right.

2. They don’t grasp the fact that the true Church is the wheat (true twice-born believers) growing up around the weeds (professing Christians who do not have the Holy Spirit in them) throughout ALL denominations and non-denominations.

So the most important issue in all of this discussion is this:

“So the servants of the householder came and said unto him, Sir, didst not thou sow good seed in thy field? from whence then hath it tares[weeds]? He said unto them, An enemy hath done this. The servants said unto him, Wilt thou then that we go and gather them up? But he said, Nay; lest while ye gather up the tares[weeds], ye root up also the wheat with them. Let both grow together until the harvest: and in the time of harvest I will say to the reapers, Gather ye together first the tares[weeds], and bind them in bundles to burn them: but gather the wheat into my barn.” Matthew 13:27-30