Find out why so many people still use the King James Version of the Holy Bible. There are many serious problems with a large number of modern bible versions. The articles listed below will help you learn some things about the Bible you use and your pastor uses. Don’t assume that modern translations are better or just consist of updated language. Many modern Bible translations are based on corrupt Greek manuscripts that vary in significant ways from the King James Bible. Some of the differences involve errors, changes and omissions that affect critical/essential Bible doctrines.

Before looking at Bible translation versions, it can be helpful to look at the various Greek and Hebrew manuscripts that have been used by Bible translators.

“Sanctify them through thy truth: thy word is truth.” John 17:1

Our Own Bible Version Articles: 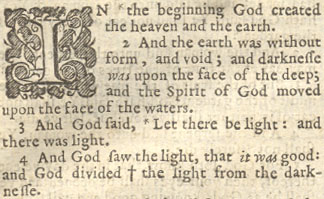 Articles Around The Web About The KJV And Problems With Modern Bible Translations: 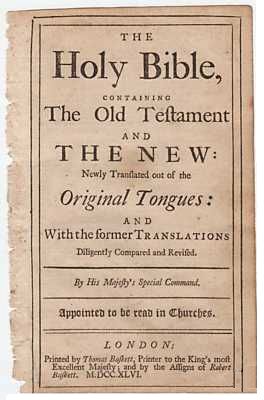 The King James Bible Compared To The Geneva Bible:

I am not advocating the use of ONLY the King James Version of the Bible and I am not saying that the KJV is divinely inspired – which the original Hebrew and Greek manuscripts ARE, although I do believe the KJV is a very good, very accurate translation and worth standardizing upon, as had been the practice of a majority of English-speaking churches for centuries. I am definitely advocating the avoidance of Bible versions that use UNRELIABLE and most likely CORRUPT manuscripts as their source material, as concluded by TRUSTWORTHY bible scholars like John Gill and others. Here is what John Gill had to say about the “other” (untrusted) manuscripts and their omission of many bible verses, taken from Gill’s commentary on 1John 5:7 “For there are three that bear record in heaven”…

The genuineness of this text has been called in question by some, because it is wanting (missing) in the Syriac version, as it also is in the Arabic and Ethiopic versions; and because the old Latin interpreter has it not; and it is not to be found in many Greek manuscripts; nor cited by many of the ancient fathers, even by such who wrote against the Arians, when it might have been of great service to them: to all which it may be replied, that as to the Syriac version, which is the most ancient, and of the greatest consequence, it is but a version, and a defective one. The history of the adulterous woman in the eighth of John, the second epistle of Peter, the second and third epistles of John, the epistle of Jude, and the book of the Revelations, were formerly wanting in it, till restored from Bishop Usher’s copy by De Dieu and Dr. Pocock, and who also, from an eastern copy, has supplied this version with this text. As to the old Latin interpreter, it is certain it is to be seen in many Latin manuscripts of an early date, and stands in the Vulgate Latin edition of the London Polyglot Bible: and the Latin translation, which bears the name of Jerome, has it, and who, in an epistle of his to Eustochium, prefixed to his translation of these canonical epistles, complains of the omission of it by unfaithful interpreters. And as to its being wanting (missing) in some Greek manuscripts, as the Alexandrian, and others, it need only be said, that it is to be found in many others; it is in an old British copy, and in the Complutensian edition, the compilers of which made use of various copies; and out of sixteen ancient copies of Robert Stephens’s, nine of them had it: and as to its not being cited by some of the ancient fathers, this can be no sufficient proof of the spuriousness of it, since it might be in the original copy, though not in the copies used by them, through the carelessness or unfaithfulness of transcribers; or it might be in their copies, and yet not cited by them, they having Scriptures enough without it, to defend the doctrine of the Trinity, and the divinity of Christ: and yet, after all, certain it is, that it is cited by many of them; by Fulgentius, in the beginning of the “sixth” century, against the Arians, without any scruple or hesitation; and Jerom, as before observed, has it in his translation made in the latter end of the “fourth” century; and it is cited by Athanasius about the year 350; and before him by Cyprian, in the middle, of the “third” century, about the year 250; and is referred to by Tertullian about, the year 200; and which was within a “hundred” years, or little more, of the writing of the epistle; which may be enough to satisfy anyone of the genuineness of this passage; and besides, there never was any dispute about it till Erasmus left it out in the first edition of his translation of the New Testament; and yet he himself, upon the credit of the old British copy before mentioned, put it into another edition of his translation.” – John Gill

LOOK What’s Missing in Your Bible by David Daniels

Does The Issue Of Bible Versions Really Matter?

1. Are we not to care about what may be added, changed or removed from our bibles unless and until it gets to the point where a major doctrine is affected? Won’t it be too late then? Isn’t this all part of contending for the faith and proving all things? Should a doctor wait until cancer spreads to at least 3 organs before he treats a patient for it?

2. Isn’t truth worth digging for and fighting for, especially in view of what Jesus said to Pilate about truth in John 18:37 (I have come to testify to the truth), especially when we are dealing with the truth of God’s word? Bear in mind that Jesus could have said a lot of things to his executioner just before his execution but he chose to say that he came to testify to the truth. This fact along with the fact that Satan was all too anxious to have Adam and Eve question God’s word, should be a reminder to all Christians that there are forces constantly at work, going about undermining and corrupting God’s word and I don’t think the correct response is to ignore the attacks for the sake of unity, but to base unity upon truth, a truth that is worth seeking with all your heart (Jeremiah 29:13).

3. If the Received Text (majority text) has been viewed as more trustworthy by the Church for so many centuries, and if readability is a concern, why not use newer versions than the KJV that use the more reliable manuscripts, like Young’s Literal Translation (YLT)? This may be a matter of there being a lot more commentaries and concordances for the KJV than for the MKJV, YLT or other newer translations.

4. Should we use the modern versions (NASB, ESV, NIV, etc.) because they happen to be so popular with well known Bible teachers and preachers who use them and/or recommend them? Perhaps those well known preachers “bought” into a lot of false information and propaganda about bible versions from whatever Bible college or seminary they attended, institutions that were, in many cases, infiltrated by liberal scholars and false teachers a long time ago. How many contemporary Bible schools have men like John Gill on their staff these days?

5. Perhaps modern versions are less about “readability” and “accuracy” and more about copyrights and making money. Similarly, we should ask ourselves if modern bible schools are more about making money and cranking out more hirelings for the unbiblical “clergy-laity” system, who then go on to tell the “sheeple” to just listen to their “masters” (see Matthew 23:8-10), instead of telling them to be like the Bereans of Acts 17:11 who didn’t even trust the words of the apostle Paul until they had confirmed that his teachings were in line with Scripture.