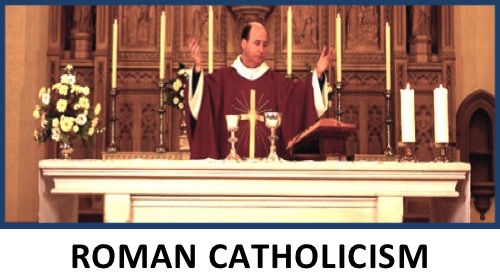 Information about Catholicism, including their incorrect views on salvation and their unbiblical teachings and erroneous practices.

Feel free to check out our resources on Roman Catholicism from the menu below (Catholic reference books, Catholic doctrine and dogma, famous Catholics and ex-Catholics).

PLEASE NOTE: If you feel that these materials are anti-Catholic, please read this article: How Do YOU Determine Who Is Pro-Catholic Or Anti-Catholic? which will explain how our information on Catholicism is very PRO-Catholic.

Did you know this about the Catholic Church:

A clergyman hopelessly entrenched in Roman Catholic dogma once taunted William Tyndale with the statement, “We are better to be without God’s laws than the Pope’s”. Tyndale was infuriated by such Roman Catholic heresies, and he replied, “I defy the Pope and all his laws. If God spare my life ere many years, I will cause the boy that drives the plow to know more of the scriptures than you!”

Reference books about Catholicism, its history, its persecution of true Christians and how its salvation plan differs from true salvation as taught by Jesus Christ and his disciples and as outlined in the Holy Bible.

Catholic men and women whom the world idolizes including the various popes and Mother Teresa and famous Protestants (like Billy Graham) who secretly work with the Catholic Church.

Various Catholic organizations that may appear benevolent on the outside but are involved in very sinister, criminal activities around the world.

A collection of gospel messages directed towards Roman Catholics. Several of these messages are illustrated. All of the images are JPG files that can be downloaded and shared on social media.

Notable News About The Catholic Church, The Pope And The Vatican

Somewhat recent news regarding events related to the Catholic Church and their leadership, including but not limited to the pope of Rome.

Other Ministries That Reach Out Catholics:

Ministries that show how the Church of Rome is lying to their millions of followers about many things including about the true Gospel of salvation by grace alone through faith alone in the Lord Jesus Christ and His merits alone… Several of these ministries were very helpful to me when the Lord saved my soul in 1985, and drew me OUT of Catholicism and into His glorious eternal kingdom…

Contrary to Catholic claims and propaganda, the “one true holy Catholic Church” is rather fragmented, and not the unified whole that they think they are and that they claim to be.