How does the Catholic “Vicar Of Christ” measure up to the Lord Jesus Christ whom the pope claims to represent here on earth? Should we care? I would think that we should GREATLY care, if the eternal destiny of our souls is at stake. If the leader of the Catholic church is involved in the various kinds of unbiblical and unChristian things mentioned below, how can you be sure he is leading you correctly regarding salvation through the Lord Jesus Christ? Many Christian-like cults claim they are the one true Church and they often claim that their founders or leaders were the people whom we should follow if we want to get to heaven or “paradise” someday. So let’s take a good close look at the pope of Rome as contrasted to Jesus Christ. 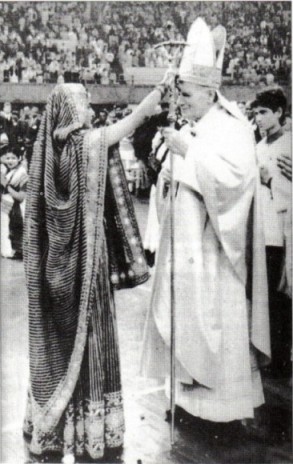 “They provoked him to jealousy with strange gods, with abominations provoked they him to anger.” [Deuteronomy 32:16]

The pope just loves any book except the Bible… 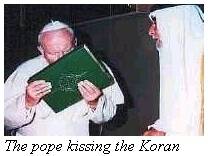 If God considers the pope – the so-called “holy father” of Catholicism – to be a sinner in need of salvation, what must He think of YOU?

If you are a Catholic and this material offends you or upsets you, then please ask yourself: “Is it possible that God might be offended if some mere mortal usurped the honor, respect, recognition, attention, authority, prestige, admiration and glory due to God alone?“.

“according as it is written, He that glorieth, let him glory in the Lord.” [1Corinthians 1:31]

“For the LORD thy God is a consuming fire, even a jealous God.” [Deuteronomy 4:24]

Since the ruler of the Catholic church has titles that rightfully belong solely to Jesus Christ, it is only fair that we see if these two persons have anything in common. We will do that by examining the Pope and comparing him with what Jesus teaches in the Holy Bible. If you too have been fooled by the Church of Rome into believing that the pope is somebody special to God, you’re not alone. Millions of others have been deceived also, including the author of this article, at one time. And in a similar fashion people around the world and people from the beginning of time have been fooled into believing that various charismatic men & women are somehow more in touch with God than themselves, when nothing could be further from the truth.

The pope lets people refer to him as the Sovereign of the State of Vatican City, Bishop of Rome, Vicar of Jesus Christ, Successor of St. Peter, Prince of the Apostles, Supreme Pontiff of the Universal Church, Patriarch of the West, Primate of Italy, Archbishop and Metropolitan of the Roman Province, Pontifex Maximus, and “the Pope”.

Jesus said: “For whosoever exalteth himself shall be abased; and he that humbleth himself shall be exalted.” [Luke 14:11] and “But all their works they do for to be seen of men: they make broad their phylacteries, and enlarge the borders of their garments, And love the uppermost rooms at feasts, and the chief seats in the synagogues, And greetings in the markets, and to be called of men, Rabbi, Rabbi.” [Matthew 23:5-7]

Anybody can look holy in the right costume, even comedian Bob Hope.

The pope lets people call him “Holy Father”. This is a blasphemous insult to God, because Holy Father is a title and a role that belongs to God ALONE! In all of the entire Bible, the title Holy Father is used only once, in reference to God the Father in Heaven. The person using that title is none other than the Lord Jesus Christ. NEVER did ANYONE in the Bible ever DARE to call a mere mortal “Holy Father”!

Jesus said: “And now I am no more in the world, but these are in the world, and I come to thee. Holy Father, keep through thine own name those whom thou hast given me, that they may be one, as we are.” [John 17:11]

The pope has thousands of servants subordinate to himself called Cardinals, Archbishops, Bishops, Priests, Monks, and Nuns.

The pope talks about peace and love and yet he has yet to reverse the blood thirsty decrees that his church put in place to sanction the murder of people who disagree with Catholicism.

Jesus said: “All therefore whatsoever they bid you observe, that observe and do; but do not ye after their works: for they say, and do not.” [Matthew 23:3] and “He answered and said unto them, Well hath Esaias prophesied of you hypocrites, as it is written, This people honoureth me with their lips, but their heart is far from me.” [Mark 7:6]

The pope runs his own self-governed country called Vatican City that has its own secretary of state who meets with ambassadors from many nations.

“Let no man deceive you by any means: for that day shall not come, except there come a falling away first, and that man of sin be revealed, the son of perdition; Who opposeth and exalteth himself above all that is called God, or that is worshipped; so that he as God sitteth in the temple of God, shewing himself that he is God.” [2Thes 2:3-4] 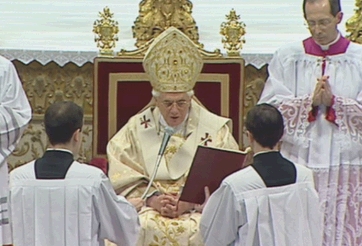 The pope says he is infallible in matters of faith and morals.

Jesus said: “There shall be false teachers among you” [2 Peter 2:1]. The pope is the greatest false teacher of all. Not only is he NOT infallible in matters of faith and morals, he preaches a false soul-damning, man-centered, works salvation plan. The Catholic salvation plan denies that Christ’s sacrifice on the cross of Calvary was able to pay the full sin debt owed to God by lost sinners. What that boils down to, is that the pope and the millions of souls following him don’t even know what a true Savior is and they are all headed for hell if they die trusting in their religious system rather than the merits of Christ ALONE.

The pope lives in an enormous palace in Rome surrounded with art treasures from around the world in a number of extremely ornate buildings.

Jesus said: “Foxes have holes, and the birds of the air have nests; but the Son of man hath no where to lay his head.” [Matthew 8:20] 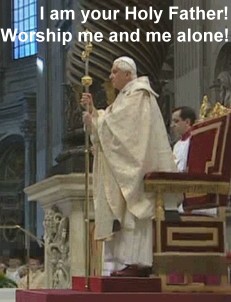 The pope controls immeasurable wealth that could be given to the poor.

Jesus said: “lay up for yourselves treasures in heaven, where neither moth nor rust doth corrupt, and where thieves do not break through nor steal” [Matthew 6:20]

The pope gets a royal welcome from heads of state of almost all countries on earth.

Jesus said: “Woe unto you, when all men shall speak well of you! for so did their fathers to the false prophets.” [Luke 6:26]

Did you know that the U.S. Congress banned diplomatic relations with the Vatican in 1867 and that ban was not lifted until 1984 (117 years later!)? What did early American leaders know about the Vatican that is no longer public knowledge? Click HERE for more information on this issue.

We all need to be very concerned about who we listen to when it comes to our eternal dwelling place. If we are trusting in the teachings and traditions of men rather than the teachings of God in the Holy Bible, then we are sure to find ourselves under the wrath of God for all eternity:

“Howbeit in vain do they worship me, teaching for doctrines the commandments of men.” [Mark 7:7]

“Many will say to me in that day, Lord, Lord, have we not prophesied in thy name? and in thy name have cast out devils? and in thy name done many wonderful works? And then will I profess unto them, I never knew you: depart from me, ye that work iniquity.” [Matthew 7:22-23]

Why do we even have popes, or gurus, or other “holy men”?

Sinful man wants a sinful god, a god he can see, a god like himself.  So he dresses up a sinner to look holy and he assigns divine attributes to this mere mortal, and … presto! … he has himself a man-made god!  One who is not holy and not sinless, but rather, one who does not make the worshipper feel too uncomfortable about his own sinfulness. So for the moment, Catholics have Jorge Mario Bergoglio (a.k.a. Papa Francisco, a.k.a. Pope Francis). Previoulsy they had Joseph Alois Ratzinger (a.k.a. Pope Benedict).  Buddhists have their founder Siddhartha Gotama. Hindus have Lord Krishna and various gurus such as Bhagwan Shree Rajneesh and Satya Sai Baba. Muslims have Mohammed whose writings in the Koran they believe are from God so that they can justfiy in their own minds that it is OK to kill people who don’t agree with them.  Each religion has its “holy men” (or women), whom the worshippers idolize, whom they are preoccupied with, so that they might not have to deal with the thrice-holy God of the Bible – though all of us will have to deal with Him some day.