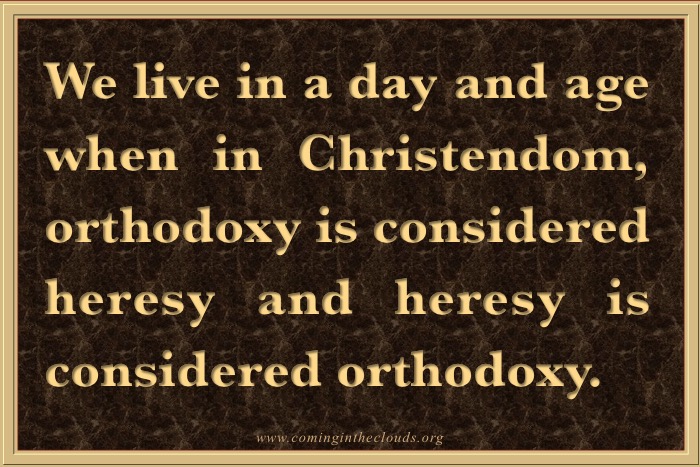 Arminianism is in! Calvinism is out!

We are now living in a day and age when biblical doctrine, that was once considered AND WIDELY ACKNOWLEDGED* to be “orthodox” (i.e. true, accurate, biblically sound, and accepted by many genuine Christians) is now looked upon as heretical and what was once branded by the Church at large as heresy is now fully embraced as orthodox (wholly true and widely accepted as Biblical). And the sheer horror of this matter is that this has occurred in the area of soteriology – the very Gospel itself – the doctrines pertaining to SALVATION! Thanks to the following reasons, I believe:

What are we getting at here?

Well, for the uninformed, we are saying that the unbiblical doctrine known as Arminianism is running rampant in modern Christian churches. It is a false gospel that puts man in control of his own salvation, claiming that lost sinners can get saved by accepting Christ, via some prayer, or formula or some other method, any time THEY wish. This doctrine was branded as heresy centuries ago and was known as Pelagianism, Semi-Pelagianism, and Arminianism. This gospel assumes that man’s will is free, even to the point of being able to make the first move, to turn to God. Granted, there may be a large number of genuine Christians in this camp, who just don’t realize that God regenerated them FIRST before they reached out to Christ, and it was this supernatural act of God (a.k.a. the “second birth”) that enabled them to even want to come to Christ, the real Christ and not some counterfeit Christ who needs a sinner’s help to accomplish their salvation.

So how are pastors, preachers and teachers getting away with the spreading of this false man-centered gospel?

There are two main ways they are accomplishing this, even to the point of fooling genuine Christians:

Often they equate hyper-Calvinism, which actually is unbiblical, with conventional Calvinism, which is a true, biblical description of five major points of doctrine regarding salvation. Then by attacking this “straw man” called hyper-Calvinism, as if it were the doctrine that Calvinists believe, they convince their hearers that Calvinism is bad, and yet they never really tell their hearers the truth about what real Calvinism teaches (usually because they don’t understand it, which as I mentioned earlier, is often a result of not understanding the doctrine of Total Depravity, that man is too spiritually dead to seek God or to truly, biblically repent, while yet unregenerated).

They will say that some Christians favor the doctrines of Calvinism (and with it the doctrine Predestination) because if its true then they don’t have to witness (share the Gospel) with others, since God will save whom He wants to save with or without their help. This claim ignores the fact that even Calvinists believe that God uses the preaching of His Word to convict and convert sinners, in conjunction with the power of the Holy Spirit operating on God’s elect:

They will randomly quote bible verses out of context that appear to support a free-will view of the Gospel, yet they will never address the fact that the unsaved are DEAD in their trespasses and sins (Ephesians 2:1), which the Bible describes further in Romans 3:11 and Romans 8:7-8:

“Because the carnal mind is enmity against God: for it is not subject to the law of God, neither indeed can be. So then they that are in the flesh cannot please God.” – Romans 8:7-8

If you try to challenge the teachings of these Arminian (free-will) preachers regarding their false “free-will” gospel, they will brand you a heretic and tell you to leave their church. I say this from my own experience. They may try to be diplomatic about it and tell you that you would be happier elsewhere or they may accuse you of being divisive if you continue to stick to your guns about the Gospel (regarding God’s sovereignty in electing sinners to salvation), and then they are likely to tell you to keep your views to yourself or go elsewhere. It is so sad that so many preachers and teachers of our day have embraced heresy as if it were orthodoxy. But then again, it is very possible that these are not true shepherds but rather thieves and robbers or wolves in sheep’s clothing. — RM Kane

FOOTNOTES:
* The most respected and highly regarded Christian theologians and Bible scholars of all time were Calvinists. Among these extremely well respected teachers of the Bible were Matthew Henry (known for his commentary on the Bible), John Gill (also known for an exceptional bible commentary) and Charles Spurgeon (one of the greatest preachers and evangelists of all time). The most notable bible teachers of our day who believe and teach that Calvinism is the Gospel include John MacArthur (Grace To You Ministry), RC Sproul (Ligonier Ministry) and D. James Kennedy (DJ Kennedy Ministries).

Other articles regarding salvation and the true Gospel of Jesus Christ:

Posted in Blog, Predestination & Free Will

One Response to Orthodoxy Is Heresy