Why Christians Should Not Obtain A State Marriage License

Five Reasons Why Christians Should Not Obtain
A State Marriage License 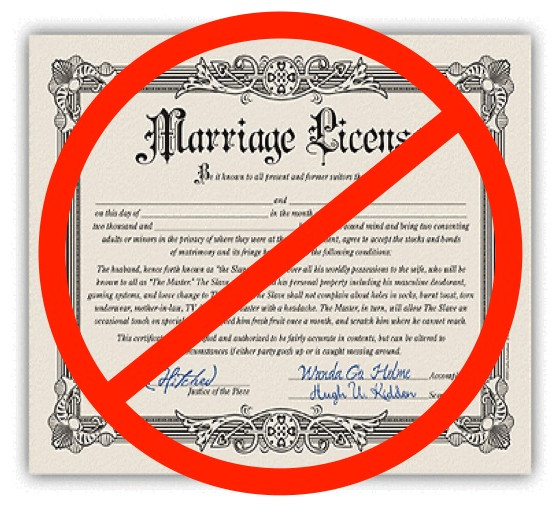 Every year thousands of Christians amble down to their local county courthouse and obtain a marriage license from the State in order to marry their future spouse. They do this unquestioningly. They do it because their pastor has told them to go get one, and besides, “everybody else gets one.” This article attempts to answer the question – why should we not get one?

1. The definition of a “license” demands that we not obtain one to marry.

Black’s Law Dictionary defines “license” as, “The permission by competent authority to do an act which without such permission, would be illegal.” We need to ask ourselves- why should it be illegal to marry without the State’s permission? More importantly, why should we need the State’s permission to participate in something which God instituted (Gen. 2:18-24)? We should not need the State’s permission to marry nor should we grovel before state officials to seek it. What if you apply and the State says “no”? You must understand that the authority to license implies the power to prohibit. A license by definition “confers a right” to do something. The State cannot grant the right to marry. It is a God-given right.

2. When you marry with a marriage license, you grant the State jurisdiction over your marriage.

In 1993, parents were upset here in Wisconsin because a test was being administered to their children in the government schools which was very invasive of the family’s privacy. When parents complained, they were shocked by the school bureaucrats who informed them that their children were required to take the test by law and that they would have to take the test because they (the government school) had jurisdiction over their children. When parents asked the bureaucrats what gave them jurisdiction, the bureaucrats answered, “your marriage license and their birth certificates.” Judicially, and in increasing fashion, practically, your state marriage license has far-reaching implications.

3. When you marry with a marriage license, you place yourself under a body of law which is immoral.

By obtaining a marriage license, you place yourself under the jurisdiction of Family Court which is governed by unbiblical and immoral laws. Under these laws, you can divorce for any reason. Often, the courts side with the spouse who is in rebellion to God, and castigates the spouse who remains faithful by ordering him or her not to speak about the Bible or other matters of faith when present with the children.

As a minister, I cannot in good conscience perform a marriage which would place people under this immoral body of laws. I also cannot marry someone with a marriage license because to do so I have to act as an agent of the State! I would have to sign the marriage license, and I would have to mail it into the State. Given the State’s demand to usurp the place of God and family regarding marriage, and given it’s unbiblical, immoral laws to govern marriage, it would be an act of treason for me to do so.

When you read the Bible, you see that God intended for children to have their father’s blessing regarding whom they married. Daughters were to be given in marriage by their fathers (Dt. 22:16; Ex. 22:17; I Cor. 7:38). We have a vestige of this in our culture today in that the father takes his daughter to the front of the altar and the minister asks, “Who gives this woman to be married to this man?”

Historically, there was no requirement to obtain a marriage license in colonial America. When you read the laws of the colonies and then the states, you see only two requirements for marriage. First, you had to obtain your parents permission to marry, and second, you had to post public notice of the marriage 5-15 days before the ceremony.

By issuing marriage licenses, the State is saying, “You don’t need your parents permission, you need our permission.” If parents are opposed to their child’s marrying a certain person and refuse to give their permission, the child can do an end run around the parents authority by obtaining the State’s permission, and marry anyway. This is an invasion and removal of God-given parental authority by the State.

5. When you marry with a marriage license, you are like a polygamist.

From the State’s point of view, when you marry with a marriage license, you are not just marrying your spouse, but you are also marrying the State.  The most blatant declaration of this fact that I have ever found is a brochure entitled “With This Ring I Thee Wed.” It is found in county courthouses across Ohio where people go to obtain their marriage licenses. It is published by the Ohio State Bar Association. The opening paragraph under the subtitle “Marriage Vows” states, “Actually, when you repeat your marriage vows you enter into a legal contract. There are three parties to that contract. 1.You; 2. Your husband or wife, as the case may be; and 3. the State of Ohio.”

When Does the State Have Jurisdiction Over a Marriage?

God intended the State to have jurisdiction over a marriage for two reasons – 1). in the case of divorce, and 2). when crimes are committed i.e., adultery, bigamy. etc. Unfortunately, the State now allows divorce for any reason, and it does not prosecute for adultery.  In either case, divorce or crime, a marriage license is not necessary for the courts to determine whether a marriage existed or not. What is needed are witnesses. This is why you have a best man and a maid of honor. They should sign the marriage certificate in your family Bible, and the wedding day guest book should be kept.  Marriage was instituted by God, therefore it is a God-given right. According to Scripture, it is to be governed by the family, and the State only has jurisdiction in the cases of divorce or crime.

History of Marriage Licenses in America

George Washington was married without a marriage license. So, how did we come to this place in America where marriage licenses are issued?  Historically, all the states in America had laws outlawing the marriage of blacks and whites. In the mid-1800’s, certain states began allowing interracial marriages or miscegenation as long as those marrying received a license from the state. In other words they had to receive permission to do an act which without such permission would have been illegal.

Blacks Law Dictionary points to this historical fact when it defines “marriage license” as, “A license or permission granted by public authority to persons who intend to intermarry.” “Intermarry” is defined in Black’s Law Dictionary as, “Miscegenation; mixed or interracial marriages.”

Give the State an inch and they will take a 100 miles (or as one elderly woman once said to me “10,000 miles.”) Not long after these licenses were issued, some states began requiring all people who marry to obtain a marriage license. In 1923, the Federal Government established the Uniform Marriage and Marriage License Act (they later established the Uniform Marriage and Divorce Act). By 1929, every state in the Union had adopted marriage license laws.

What Should We Do?

When I marry a couple, I always buy them a Family Bible which contains birth and death records, and a marriage certificate. We record the marriage in the Family Bible. What’s recorded in a Family Bible will stand up as legal evidence in any court of law in America. Early Americans were married without a marriage license. They simply recorded their marriages in their Family Bibles. So should we.

This pamphlet is not comprehensive in scope. Rather, the purpose of this pamphlet is to make you think and give you a starting point to do further study of your own. If you would like an audio sermon regarding this matter, just send a gift of at least five dollars in cash to: Mercy Seat Christian Church 10240 W. National Ave. PMB #129 Milwaukee, Wisconsin 53227, or go to www.mercyseat.net

Pastor Trewhella expresses some valid and important points herein. As a Pastor, he well articulates God’s Law. However, Pastor Trewhella would be the first to admit that he is not an expert in civil law, and particularly in those matters touching on divorce (“dissolution of marriage”).

Tragically, a great many Christian marriages end in divorce, and many even for biblically valid reasons (e.g. adultery). We, therefore, believe it wise and prudent to take certain necessary steps in advance of marriage to ensure that, should the worst happen (a divorce) both husband and wife, as well as their children, are guaranteed their respective rights. No such guarantees are afforded should the couple merely sign their names in a family Bible.

I’m currently researching this matter and am looking forward to publishing a book later in 2005 on the subject of the marriage license, along with being able to offer specific recommendations that are more legally substantive than merely signing the family Bible.

For more information on how to organize and operate as a free-church, contact: