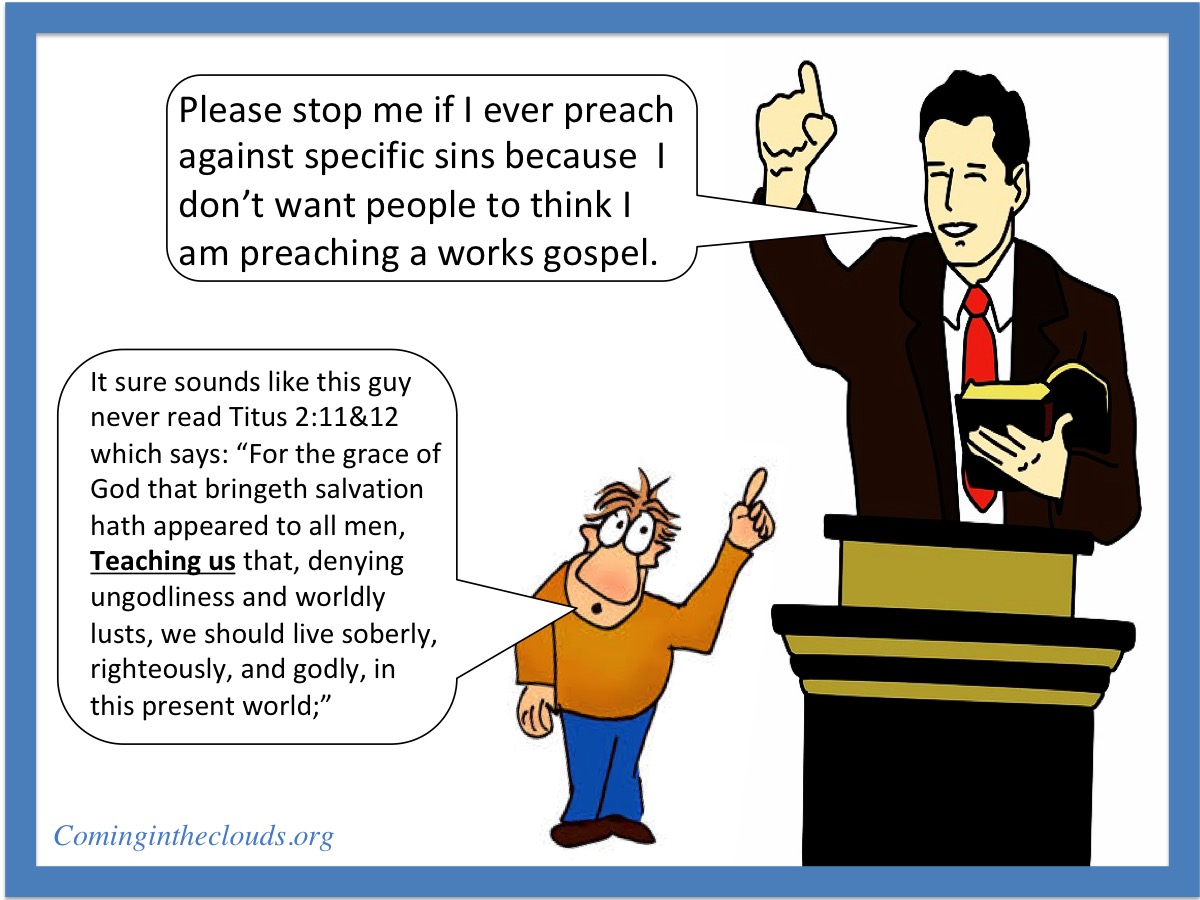 “Them that sin rebuke before all, that others also may fear.”
1 Timothy 5:20

There are some sovereign grace preachers who think they are doing God a service by not preaching against sin. They have taken such an extreme view of the gospel, that they feel any preaching against sin in the local church might cause some in their audience to think that salvation is by works. These churches end up ignoring all kinds of sinful behavior in their midst, since to preach against sinful behavior would go against their philosophy. By not preaching against specific sins congregations can easily end up looking no different than the world, with their members drinking, smoking, divorcing and indulging in consumerism and other worldly things at rates equal to or perhaps even higher than the general public. Do you wonder if those preachers don’t preach against sin – specific sins – for the same reason that most preachers don’t preach against it? Could it have to do with tithing, attendance, popularity or even because they would end up exposing themselves as hypocrites?

Another reason why preachers end up worrying so much about causing their audience to think that salvation is by works is because churches are unbiblically structured. Pastors think church sermons should often focus on evangelizing the people in the pews. And members no longer engage in much if any evangelism on their own. They are merely encouraged to bring a friend to church on Sunday, who the “professional” up front will then evangelize. But all believers are ministers of the gospel and are called to make disciples. Likewise, the biblical pattern for local church meetings is for there to be lots of interaction when they gather together. It is not supposed to be so they can be preached at by some guy up front who is assuming they may not be saved. It is so they can fellowship with each other, pray for each other, break bread together, share testimonies, share from God’s word something He has taught them recently, share a psalm, hymn or spiritual song that has really ministered to them.

Of course if our goal is to insulate ourselves from each other then the one-man-show is the way to go. But if our goal is to fulfill our Lord’s command to “Bear ye one another’s burdens and so fulfill the law of Christ”, then we ought to be “trading in” the speaker-audience model for the interactive family-reunion style of church meeting, similar to what we see spoken of in the New Testament regarding the first century church that met primarily in homes and had very interactive meetings as is mentioned in 1 Corinthians. In that epistle, Paul was not condemning their interactive church meeting, he was simply correcting the problem that is common to interactive meetings: they can get disorderly if a conscious effort is not made to keep things in order. It is precisely by having interactive church meetings that we are enabled to see who the false converts are among us. True sheep speak in a heavenly language. False sheep do not. I am not talking about speaking in unknown tongues here at all. What I mean is that the conversation of true sheep will be heaven-focused, holiness-focused, scripture-focused and Jesus-focused. But a church environment that gags the mouths of everyone except the paid professional, is not a true church, and in fact, it is not even a close approximation of it. You can get the same thing from a CD, DVD or a Youtube video if all you seek to be is a member of an audience. But if you want to put your gifts and talents to work among a local body of believers, if you want to regularly share a meal together with them, if you want to lean on each other and pray for one another, then a CD or a video just won’t do it and neither will the speaker-audience church model.