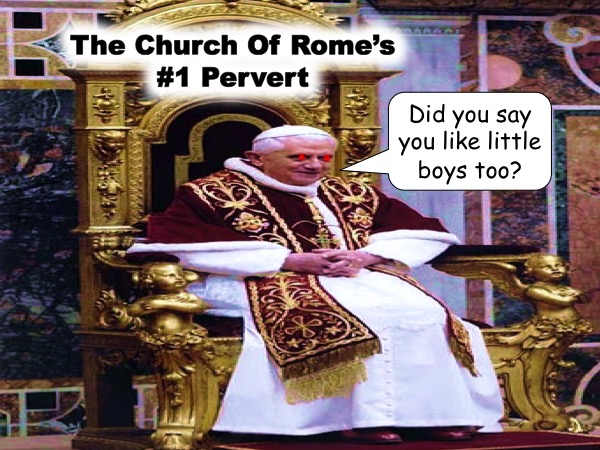 Please note: I did not capitalize the word “pope” in this article to express my distain for that religious office and the scumbags and perverts who have occupied it in the past and who currently occupy it. If I had known the truth about those folks, I would have left the Catholic Church long before the Good Lord saved me by His grace. Anyone who remains in that “Church”, or rather that den of iniquity, is condoning gross immorality of the most despicable kind, and claiming ignorance is no excuse. Denying the facts will not make them go away either.

While there is no solid evidence to prove that ALL popes are and have been pedophiles, many probably have been, from reports by those who have been victimized by that institution and by the clergy that have left that false Christian religious and political system. Many priests and other higher level Catholic clergy are known homosexuals[1] and pedophiles. “Between 20 and 60 percent of all Catholic priests are gay, according to one estimate cited by Donald B. Cozzens in his well-regarded ‘The Changing Face of the Priesthood'”[2]. Even pope Francis has publicly stated that [at least] one in fifty Catholic clergy are pedophiles[3,4].

What pope Francis will never tell the public is that his predecessor, pope Gregory XVI (also known as Joseph Aloisius Ratzinger) stepped down from the office of pope because he was about to be arrested for pedophile related activities[5]. What much of the world does not realize is how much the people of Italy hate these perverts. We are not talking about the devout Catholics in Italy, who will never believe anything bad about their beloved “Papa”. One of the pedophile sex scandals surrounding previous pope Gregory involved his brother George who is also a member of the Catholic clergy, and who ran a famous Catholic boys’ choir in Bavaria where it has been revealed that two hundred and thirty-one children had been victimized over a period of decades[6].

People are wondering if the Vatican’s new child abuse tribunals “will act as a church-sponsored shield to protect its hierarchy from other legal jurisdictions”[7]. What other purpose would they serve when it is clearly the job of secular courts to legally pursue such cases, to ensure that justice is meted out and to ensure that the Vatican does NOT try to cover up these crimes?

[3] Pope Francis: ‘One in 50’ Catholic priests, bishops and cardinals is a paedophile

[6] What Pope Benedict Knew About Abuse in the Catholic Church