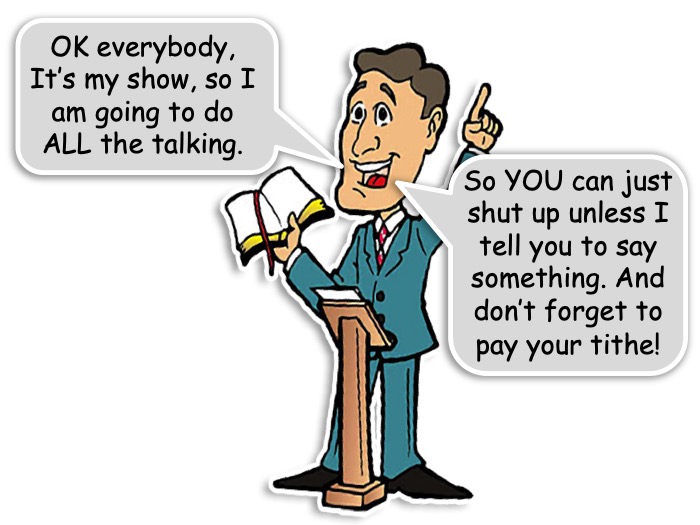 Regarding this matter, there is an excellent article on this subject written by Carl Ketcherside, called “The Clergy System“. I encourage you to take a look at that. As I lived out in my 35 years “in the Lord”, I have seen just how much the typical clergy/laity church system adversely affects discipleship and the growth of local church members. In the conventional, popular clergy/laity system, no one but the pastor (except perhaps on rare occasions) is allowed to pick songs to sing or read an inspirational poem (that they picked out), not allowed to share scriptures or Christian writings, or to get into subjects that they want to and need to learn about or that they feel led to share with others when gathered together as a church family.  It is always a pastor-centered, pastor-prepared, pastor-approved and pastor-conducted weekly meeting.

Having learned about – and then having experienced – more biblically-patterned church meetings in the past, I have struggled to participate in every “conventional” local church I’ve ever attended. But what concerns me the most about those in the clergy “system” – is that they seem to want to have an inordinate amount of control over others in the church, as if the Holy Spirit is not a good enough leader of a group of true believers. And in some churches, I am sure that there are some pastors who don’t want others to have any control over them, in any way whatsoever.

The most dangerous aspect of the clergy system is that it severely inhibits the correction and instruction of its leaders, and I don’t just mean moral correction, but theological correction (and instruction).  Being in the “big boys” club of official clergy, may allow a pastor to meet with and rub elbows with other clergy in his local area, but it also helps perpetuate this unbiblical system.

In order for me to use my spiritual gifts and make disciples, I have had to resort to internet ministries primarily, which is also sub-optimal, but unlike conventional churches, I am at least able to make disciples, teach, get feedback and get discipleship from others about my views and find answers to specific spiritual questions that I have, that the “clergy” never seem to talk about, on subjects like ecclesiology, bible versions, hermeneutics, and alternative views on eschatology.

Sadly, many Christians know nothing else but this clergy system.  By the grace of God, I was exposed to alternatives early on, such as interactive home groups where I could actually take turns with others leading a bible study while yet a new believer.  I also was able early on to lead an interactive bible study at my place of work and participate in a house church, all of which allowed me to actively participate and disciple myself as I discipled others and as they discipled me.

I find it absolutely mind boggling that so few conventional pastors ever figure out that their system is unbiblical and counterproductive… they never seem to realize that the role of a church leader is primarily to be a facilitator, to do everything they can to encourage the rest of the less mature members of the local flock to exercise their gifts, make disciples, evangelize, teach others, lead others, minister to others… not to be pew potatoes – an audience paying for a religious performance.

How can a pastor ever find out where anyone in the flock is at spiritually (what their spiritual gifts are and what their weaknesses are and what doctrine they know or don’t know or need to have corrected), unless the flock is all actively engaged in all aspects of the meetings, to the same degree that the pastor/elders/leaders are.

Another way of looking at the deficiencies of the clergy/laity system would be to go to a trade school to learn a trade, but then never being allowed to touch any tools or to ask any questions or to build anything. All you get to do is listen to the instructor tell you how to build a cabinet or how to rebuild an engine or how to weld a piece of equipment or how to fix broken pipes or how to splice wires or how to make a pizza for that matter! The point being, that it is just as important to be actively involved in one’s own Christian discipleship process as it is in learning a trade.

What the clergy system produces

What this type of highly sub-optimal clergy-centered system results in, though it may be unknowingly, is to stifle discipleship and make the rest of the body of Christ feel like spectators at a show or worse yet: as second-class citizens… at least those who want to be part of a truly biblical vibrant church family where everyone acts like true brothers and sisters, rather than where one man acts like a very busy talkative dad and everyone else is expected to act like silent inactive children, except when they are permitted to perform certain limited actions on command.

So is the true biblical New Testament based local church supposed to be an interactive meeting between equals – brothers and sisters in Christ – or is it supposed to be a non-interactive meeting where “dad” does everything and the “children” shut up, sit down and just listen – unless instructed by “dad” to utter some specific words that “dad” put in his meeting outline? — RM Kane

Posted in Church - What Its All About, House Churches, Unbiblical Church Practices