Spiritual terms used to deceive their members and others 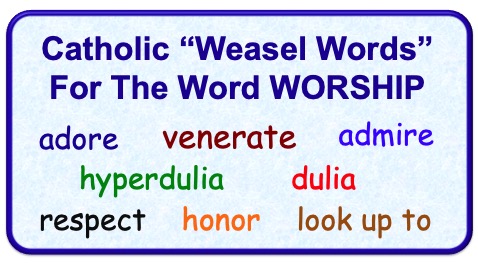 In the Catholic Church, members are taught to worship a glorified goddess-like version of Mary, the earthly mother of Jesus. They are taught to make, own and bow down to statutes of this Mary. They are taught to pray to this Mary because somehow (in spite of not being Divine) she can hear every Catholic’s prayers and then she can somehow act upon those prayers and relay them to the Lord Jesus Christ in heaven. Since all of these abilities of this glorified Mary are god-like, then those actions pertaining to this Catholic version of Mary can legitimately be called acts of worship. So, to make it appear that those are NOT sinful acts of worship, the Catholic Church has come up with some convincing excuses to make it look like they are not committing the sin of worshiping someone who is not God. Primarily what they have done is to claim that there are 3 flavors/kinds of worship in Catholicism and that the Mary flavor is NOT the same flavor of worship as the God flavor. Here are those 3 flavors of Catholic Worship:

Hyperdulia – worship that is higher than dulia but not as high as latria.

Dulia – lowest form of worship, allowed by Catholicism for worship of saints, including the worship of their relics and bones.

Rome’s use of the words latria, dulia and hyperdulia is what honest people call “weasel words“, as defined here, namely the highlighted portion of the following definition:

weasel words:
noun [ plural ]
something that someone says either to avoid answering a question clearly or to make someone believe something that is not true

If an act you perform is an act of worship in the eyes of God Almighty, it matters NOT what you call it or how you redefine your actions. So, while the use of “weasel words” may deceive the members of the Catholic Church into thinking that they are not sinning against God by their worship of Mary and other Catholic saints, they really are sinning against God, and need to REPENT (not do penance which is far different than repenting of a sin).

And there is undeniable evidence that Catholics truly worship their man-made version of Mary as if she were a goddess:

Can you imagine the Israelites, mentioned in the book of Exodus, telling God that they were not really worshiping their golden calf. They were just venerating it or honoring it? Well something like that actually happened. Aaron made a very lame excuse when confronted by Moses about that golden calf, in much the same way that Catholics make excuses for their Mary statues when confronted about them. This is what Aaron told Moses:

“And Aaron said, Let not the anger of my lord wax hot: thou knowest the people, that they are set on mischief. For they said unto me, Make us gods, which shall go before us: for as for this Moses, the man that brought us up out of the land of Egypt, we wot [know] not what is become of him. And I said unto them, Whosoever hath any gold, let them break it off. So they gave it me: then I cast it into the fire, and there came out this calf.” (Exodus 32:22-24).

That statement of Aaron’s is about as truthful as a Catholic stating that they don’t worship their man-made Queen of Heaven goddess.