How The Catholic Church Deceives Their Members

How The Catholic Church Deceives Their Members – And Others 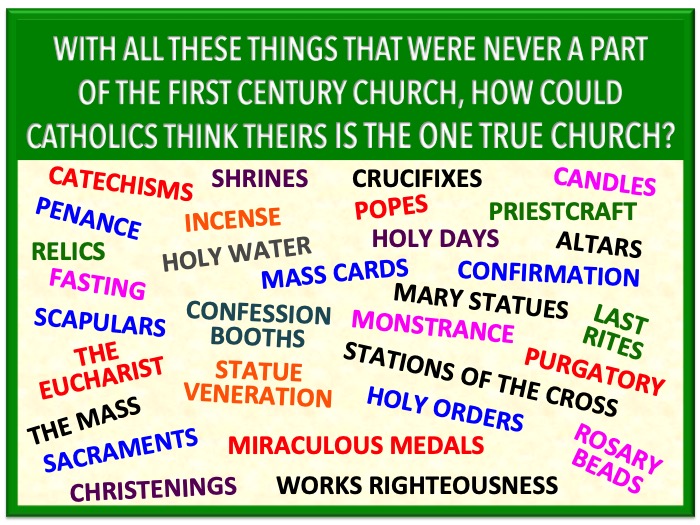 How The Catholic Church Deceives Their Members About Idol Worship

The Bible says: “For there is one God, and ONE MEDIATOR between God and men, the man Christ Jesus;” 1 Timothy 2:5.

In Catholicism, “one” apparently does not mean ONE. And in order to “get around” that restriction that God has imposed in 1 Timothy 2:5, Catholics call their OTHER mediators “intercessors” which is just another word for mediator, but their church teaches them that mediators and intercessors are two different things.

What the Catholic Church has done is create a BIG LOOPHOLE to allow them to justify ANYTHING they feel like making up. 2 Thessalonians 2:15 says:

“Therefore, brethren, stand fast, and hold the traditions which ye have been taught, whether by word, or our epistle.”

The Catholic Church likes to apply the above Bible verse to ANY doctrines and practices they have, that cannot be found in the Bible. So, if anyone tries to challenge their unbiblical teaching they can just say: “We are simply following the apostles traditions that were passed on by word of mouth”. Who can disprove that? Quite an ingenious loophole, isn’t it?

The Catholic Church uses what are referred to as “weasel words” (deceptive terminology) and their OWN unique UNBIBLICAL definitions of spiritual terms, to turn sins and sinful practices into something honorable and even into sacraments. Here are some examples of how the Catholic Church uses non-offensive, yet deceptive words to turn unbiblical practices into practices that sound perfectly acceptable, some of which were touched upon previously:

Friend, don’t let the Catholic Church deceive you. Read the Bible for yourself and see what God is saying to YOU in the pages of that all-important book.

“But in vain they do worship me, teaching for doctrines the commandments of men.” Matthew 15:9

Finding truth is virtually impossible in the Catholic Church… they have spent centuries making up excuses for their faulty foundation and for their many “inventions” (man-made teachings and practices). The true “remnant” Church is not the Catholic monstrosity nor is it some group that – according to the Catholic Church – magically appeared 500 years ago. The remnant Church has always existed in parallel to cults, including the Catholic Church which is also known as the “cult of Mary”. Men like Martin Luther and John (Jan) Huss just happened to be saved (born from above) while still IN the Catholic Church. That is true of many ex-catholics who have become born-again. Anyone can be PHYSICALLY BORN into any man-made church or religion. But it takes a supernatural work of GOD to be SPIRITUALLY BORN “from above” by the Holy Spirit. And, contrary to Catholic teaching, no Catholic priest can make THAT happen by water baptism.

“Marvel not that I said unto thee, Ye must be born again. The wind bloweth where it listeth, and thou hearest the sound thereof, but canst not tell whence it cometh, and whither it goeth: so is every one that is born of the Spirit.” John 3:7-8