Does Revelation Chapter 17 Refer To The Catholic Church

Is It Possible That Revelation Chapter 17 Refers To The Catholic Church? 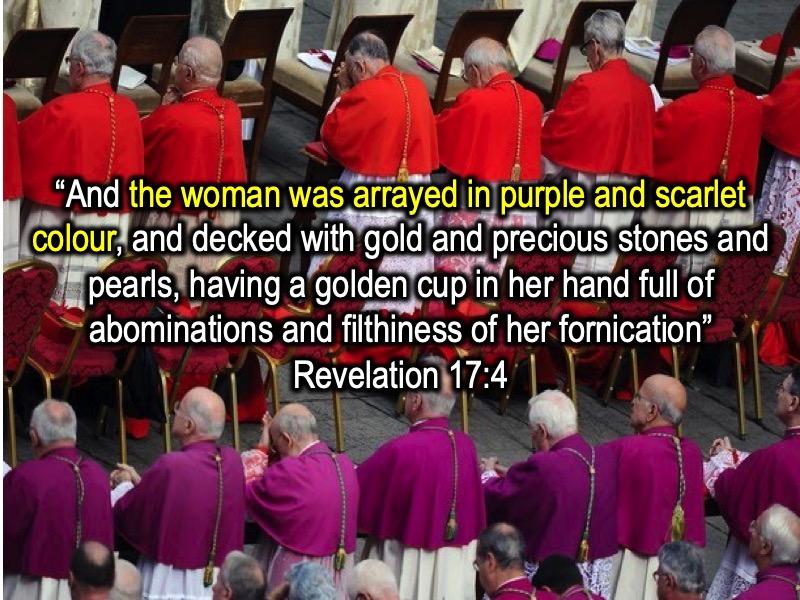 For those who have eyes to see, we know from chapter 17 of the book of Revelation, verses 1 through 6, that this passage is quite possibly referring to the Roman Catholic Church (RCC), because the RCC is still PROUD of their record of torturing and murdering the true saints of God during the RCC’s 600 year rampage (the Inquisitions of the Catholic Church) against the true believers of the true Church.

Verse 1 – “And there came one of the seven angels which had the seven vials, and talked with me, saying unto me, Come hither; I will shew unto thee the judgment of the great whore that sitteth upon many waters:”

Verse 3 – So he carried me away in the spirit into the wilderness: and I saw a woman sit upon a scarlet coloured beast, full of names of blasphemy [ONE NAME OF BLASPHEMY IS THE TITLE OF “HOLY FATHER” USED BY POPES], having seven heads and ten horns.

Verse 4 – “And the woman was arrayed in purple and scarlet colour [THE UPPER CLERGY OF THE RCC WEAR PURPLE AND SCALET ROBES], and decked with gold and precious stones and pearls [THE POPE’S TRIPLE CROWN “TIARA” IS LOADED WITH GOLD, PRECIOUS STONES & PEARLS], having a golden cup in her hand full of abominations and filthiness of her fornication:”

Verse 5 – “And upon her forehead was a name written, Mystery [THE RCC LOVES TO USE THE WORD “MYSTERY”], Babylon The Great, The Mother Of Harlots And Abominations Of The Earth.”

Verse 6 – “And I saw the woman DRUNKEN WITH THE BLOOD OF THE SAINTS [THINK 600 YEARS OF BLOODY “INQUISITIONS”], and with the blood of the martyrs of Jesus: and when I saw her, I wondered with great admiration.”